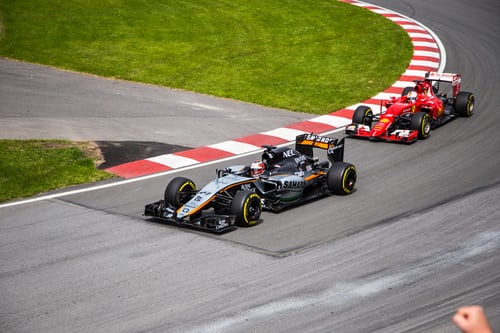 It’s going to take an incredible race to surpass the drama of Formula 1’s 2021 Azerbaijan Grand Prix, which happened on June 6th. This was a race during which very little happened during the entire middle section, but events at the start and the end gave it an explosive feel. In the case of Max Verstappen and Lance Stroll, we mean “explosive” almost literally. In the end, the race is notable for having no effect whatsoever on the all-important top two places in the driver’s World Championship.

Before the race even began, the big story was that Charles Leclerc had seemingly done the impossible by securing a second consecutive pole position in an uncompetitive Ferrari. He’d also taken pole in the previous Grand Prix – his home race in Monaco – but wasn’t able to start in Monaco because of an issue with his front wing caused by a crash in his final qualifying lap. He wasn’t expected to get anywhere near the front row this time around but was helped along in Q3 by a tow from the Mercedes of Lewis Hamilton in front of him. Q3 was red-flagged with less than two minutes to go after AlphaTauri’s Yuki Tsunoda smashed into a barrier, denying Verstappen, Hamilton, Bottas, and the rest of the more likely suitors a final attempt at bettering his time.

Sadly for Leclerc, he wasn’t able to hold the position when the race started. Lewis Hamilton always looked likely to pounce on him from second place and did so during the second lap. It was as smart a move as ever from the reigning world champion, dancing around the outside of the Ferrari driver and denying him any chance of retaking the position. From there on, we should have been treated to a fascinating contest between Hamilton and Max Verstappen. The Dutchman was slowly gaining on the Brit when Mercedes decided to “blink first” and call Hamilton into the pits. It proved to be a costly mistake. It was too early to bring Hamilton in, and a two-second delay with releasing his car meant that he lost track position to both Verstappen and his Red Bull teammate Sergio Perez.

Pit lane errors are becoming all-too-common for Mercedes, and this one appeared to have set the tone for the race. Hamilton was never in any real danger of losing third place, but he was denied the services of his teammate Valtteri Bottas to put pressure on the Red Bulls. The Finn started in tenth and didn’t improve from there for the whole race. Bottas drove like a man who knows his time at Mercedes is coming to an end. If his form doesn’t improve drastically, and soon, he might find himself replaced by George Russell of Williams at the halfway stage of the season. Qualifying and finishing in tenth is unacceptable for a Mercedes driver – especially one who hasn’t had a mechanical issue and doesn’t have any excuses. Struggling alone behind Perez and Verstappen, Hamilton’s race appeared to be run.

Then, something shocking happened. Lance Stroll’s Aston Martin blew a tyre in dramatic fashion, sending him spinning into a wall. Fortunately, the Canadian driver was OK, and the incident necessitated only a safety car rather than a red flag. It was a warning for what was to come. With only five laps of the race remaining, Max Verstappen’s tyre also blew out and sent him spinning in what looked like a shot-for-shot remake of Stroll’s crash. Verstappen was understandably furious, and tyre manufacturer Pirelli has questions to answer because Red Bull’s data gave no indication that such a blowout was on the cards. Because of the perceived risk to drivers using tyres of around the same age, this time the race was red-flagged. By that time, there were only three laps to go. It would be a sprint to the finish – and one that Hamilton ought to have been favourite for.

By this time, Sebastian Vettel had pulled himself into contention for an unlikely podium position. He’d managed his race perfectly, staying out for a long stint on his first set of tyres and pushing through the field into third position by the time the red flag came. His tyres were fresher than Hamilton’s and Perez’s, so commentators began to wonder whether the German veteran might spring a surprise and claim the win as his own. He didn’t – but then nor did Hamilton.

When the race restarted for the three-lap sprint, Hamilton sent a pit lane radio message in which he told the team to remember the season is a marathon, not a sprint. It turned out to be a classic Hamilton bluff. Like a player who’s just paid for a bet on the “Grand Prix” online slots game and sits white-knuckled waiting for the reels to stop spinning, Hamilton had already committed to a gamble. He intended to jump Perez and head into first at the restart, and he was amped up for it. It’s not uncommon for online slots players at Rose Slots CA to”go big or go home” with their final bet of the day, and Hamilton was most definitely going big. His brakes were smoking as he waited for the red lights to go out. As is the tale of many a disappointed online slots player, though, he’d become so obsessed with the idea of a big win that he forgot the consequences of a loss. Hamilton passed Perez but locked up his brakes, flying off the track in a straight line as Perez took the corner. Vettel followed him, as did half the field. Hamilton’s race was over.

That gamble – an uncharacteristic error from the usually flawless Hamilton – cost Mercedes everything. They came away from Azerbaijan with no points – an outcome that almost never happens to them. Race fans were treated to an unusual podium that was topped by Sergio Perez for only the second time in his career, with Vettel second and Pierre Gasly snatching an outstanding third place for AlphaTauri. It later transpired that Perez’s car was struggling with a mechanical issue and likely wouldn’t have been able to complete another lap. That summed up the weekend for Mercedes. Luck wasn’t on their side, and nor were circumstances. Hamilton could have overtaken Verstappen in the race for the World Championship, but he now goes into the next race still behind his rival. For his team, though, the constructor’s World Championship is beginning to inch away.