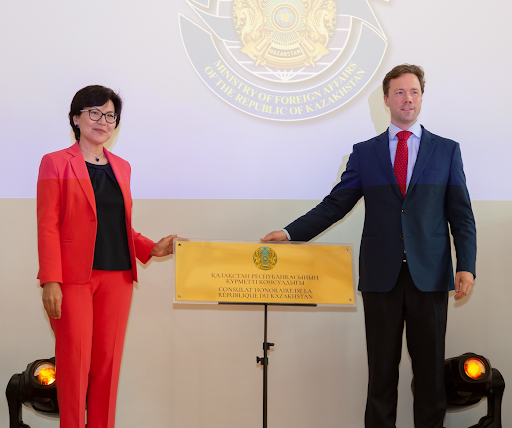 Eurasian Resources Group, under the leadership of CEO Benedikt Sobotka, promotes cooperation between Luxembourg, where the company is headquartered, and Kazakhstan, the origin of its business and where most of production facilities are located, through organising cultural events.

Eurasian Resources Group is a multinational company that originated in Kazakhstan and is headquartered in Luxembourg. It specialises in natural resources and participates in a range of sustainability initiatives.

The company operates in 15 countries across Eurasia, Africa, and Latin America, which is why it supports strategic initiatives that stimulate trade and cooperation in and between various regions including China’s Belt and Road Initiative. ERG also organises and helps coordinate events in Luxembourg to promote cultural exchange and ensure effective cooperation between the Grand Duchy and Kazakhstan. Among these are “Apero with Kazakhs”, the grand opening of the Honorary Consulate that coincided with ERG’s anniversary of its business in Luxembourg, and the celebration of the Nauryz national holiday.

Kazakh cultural exchange and gatherings
The event “Apero with Kazakhs” was arranged in September 2019 by Eurasian Resources Group and the Association of Kazakhstan-Luxembourg Cooperation, an NGO promoting educational and cultural exchange between the two nations. Although it was a pilot meeting in a series of special events, it was attended by representatives of large corporations and diplomats, in addition to Kazakhs who live and work in Luxembourg and who were happy to meet fellow nationals.

The invitation-only event had an informal programme, and it enabled guests to network and enjoy the festivities.

Senior managers of Eurasian Resources Group and the Association of Kazakhstan-Luxembourg Cooperation described the event as a success.

For the five years ERG has been operating in Luxembourg, the business has been thriving, observed Benedikt Sobotka. The group is keen to support similar initiatives aimed at creating cultural ties between the two countries and their people.

Nurgul Tursin, the President of the Association of Kazakhstan-Luxembourg Cooperation, emphasised that such events could never have taken place without the financial and practical support of companies like Eurasian Resources Group.

A national Kazakh celebration in the heart of Luxembourg
In March 2019, Eurasian Resources Group and the Association of Kazakhstan-Luxembourg Cooperation also worked together to commemorate the festival of Nauryz in Luxembourg. In certain Asian countries, including Kazakhstan, this festival marks the renewal of nature that is brought by spring. Senior diplomatic figures, ERG’s business partners, and the company’s employees enjoyed an evening of Kazakh music and dance performances.

All parties agreed that the celebration of such festivals is important for diplomatic cooperation as Kazakhstan remains one of Luxembourg’s key partners in trade and politics. The CEO of Eurasian Resources Group, Benedikt Sobotka, noted that during the 25 years that the Group has been doing business in the Republic of Kazakhstan, Nauryz has always been a significant cultural milestone. This holiday may have been the best way to allow Luxembourg to attain a deeper understanding of Kazakh culture in order to, eventually, achieve greater cooperation between the two countries.

As the celebration was warmly received by all participants, the Association of Kazakhstan-Luxembourg Cooperation now has further plans for new thematic events, such as a screening of Kazakh films and exhibitions of contemporary Kazakh art.

Five years of doing business in Luxembourg
Another memorable event organised by Eurasian Resources Group in Luxembourg combined two celebrations – ERG’s five-year anniversary of conducting business in the country and the establishment of the Honorary Consulate of Kazakhstan in Luxembourg. In May 2019 a gala reception was held for the occasion and attended by senior businessmen, company managers, and ERG’s employees as well as government representatives and envoys from both countries.

Xavier Bettel, the Prime Minister of Luxembourg, noted that he and the President of Kazakhstan share common views on important issues in Asia and Europe. A representative of Eurasian Resources Group said that the company was pleased to be a leading corporation for promoting cooperation between the two countries and to have the necessary resources to advance areas like sustainable development, technological advancement, and economic integration. The support of governments that are eager to communicate with large businesses and oversee common projects is essential for addressing important global issues including corporate standards and innovation. As such, events like these represent the next step in a long-term partnership built on trust, mutual respect and shared responsibilities.

Eurasian Resources Group is a global leader in the mining sector and has around 85,000 employees in 15 countries. ERG is a strategic partner of initiatives like the Global Battery Alliance, which aims towards a sustainable global battery sector, and the Belt and Road Initiative. Consequently, the company has the resources and experience required to work on new international projects with Luxembourg in the aerospace and financial spheres as the Grand Duchy is one of the leaders in those fields. The establishment of the Honorary Consulate helps promote new partnerships in education, sports, culture, and tourism and encourages the countries’ representatives to co-develop more humanitarian initiatives.