How Technology Has Shaped the Gaming Industry

There’s no doubting just how huge an impact technology has had on our daily lives over the past half a century or so. Innovation has transformed everything, from how we communicate to how we travel. But there’s one area of human life in particular that has been revolutionised by advances in tech – entertainment. And when it comes to entertainment, there’s no industry more relevant to 21st-century pastimes than the gaming industry.

As technology has advanced over the decades, so too has gaming become a major player in the global entertainment sector. In fact, gaming today is far more than just entertainment – the industry is a massive ecosystem for business, enterprise and innovation, and it supports an array of different careers and professions. All thanks to technology!

With gaming now a multi-billion dollar global industry which is setting the blueprint that many new markets are following, let’s take a look at how technology has been able to shape it throughout the decades.

It’s widely reported that experiments in creating the world’s first computer and video games began a few decades earlier, but it was the 1970s that first catapulted gaming into public consciousness.

A simple, tennis-themed game developed by Atari in 1972 kick-started a new craze for arcade-style gaming. Within a matter of months, coin-operated arcade gaming stations grew in popularity and games developers and manufacturers quickly realised that a brand new industry was burgeoning.

Throughout the decade, further games were released into gaming arcades all over the world. The likes of The Dungeon and Avatar enabled players to compete together to battle nefarious forces. By the end of the 1970s, a second-generation console system that was home gaming-ready was introduced to the world – Intellivision.

By just 1982, total video game sales in the US alone had already surpassed $2 billion – giving a good indication of just how lucrative this brand new tech industry would become.

PCs built for home use such as the Commodore 64 and Atari 2600 were specially equipped to play and share video games (thanks to floppy disks and cassettes), and new developments were constantly being made to improve game quality and game mechanics.

As the decade progressed, more hardware manufacturers jumped on board the trend and, soon, the industry was shaping up for a turf war between the two biggest – SEGA and Nintendo. Gamers were firmly divided into the Nintendo Entertainment System (NES) or the Sega Mega Drive (Genesis in the US) camps, worshipping at the altars of either Mario the plumber or Sonic The Hedgehog.

Although the gaming industry had only been mainstream for two decades, gaming in the 1990s was worlds apart from gaming in the 70s. With brand new consoles providing better graphics, gameplay and truly engaging characters and storylines, the arcade machines of yesteryear simply couldn’t compete.

This was the era of gaming legends – iconic titles that have gone down in history as being game-changers. All within the space of a decade, the world was introduced to Donkey Kong, Doom, Mortal Kombat, Pokémon, Half-Life, Metal Gear Solid, Super Smash Bros, Final Fantasy – the list was seemingly endless.

If there was any doubt as to the longevity or viability of gaming, this was the decade that gaming and gaming tech was firmly cemented in the mainstream.

The turn of the Millennium opened up whole new realms of possibility for gaming, giving rise to brand new gaming sectors, like iGaming, and changing the industry forever in the process.

In the late 1990s, the first online casino platforms began to emerge; however, it was in the 2000s that this segment of the market truly began to flourish. Thanks to brand new software and programming methods, operators were able to provide an authentic gaming experience via the likes of RTP slots titles, blackjack and online roulette, among many other titles.

Video gaming too began a brand new chapter during this decade. Consoles like Sony’s PlayStation 2 and Microsoft’s Xbox – released in 2000 and 2001 respectively – were instrumental in bringing about the age of the multiplayer game.

Although hand-held gaming consoles were old hat by the second decade of the new millennium and mobile games had been a thing since Nokia’s Snake, the 2010s were the years when gaming on the go fully took off as a super-power in the industry.

The combination of advances in smartphone manufacturing and the development of console-quality gaming apps meant that mobile, despite being a nascent sector, began to out-perform console and PC gaming. Sales figures for 2011 in North America show that mobile and social media pulled in over $3 billion in revenue more than PC and console – and that’s despite the launch of some sixth or seventh-gen consoles.

The 2020s – Hyperreal gaming, eSports and Beyond 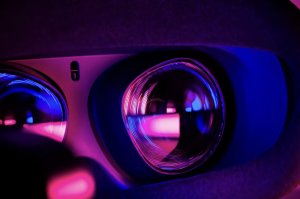 And so we come to the 2020s. We are well and truly in an age of hyperreal gaming, thanks in no small part to the continuous development of augmented and virtual reality technologies. Today, we can stream our favourite games to any device we like in a matter of moments. Professional gamers are the new rock stars and MMORPG games support global communities of players that even the most powerful social network can’t compete with.

With tech innovation showing no signs of slowing down, the only thing we want to know is – what’s next for the gaming industry?