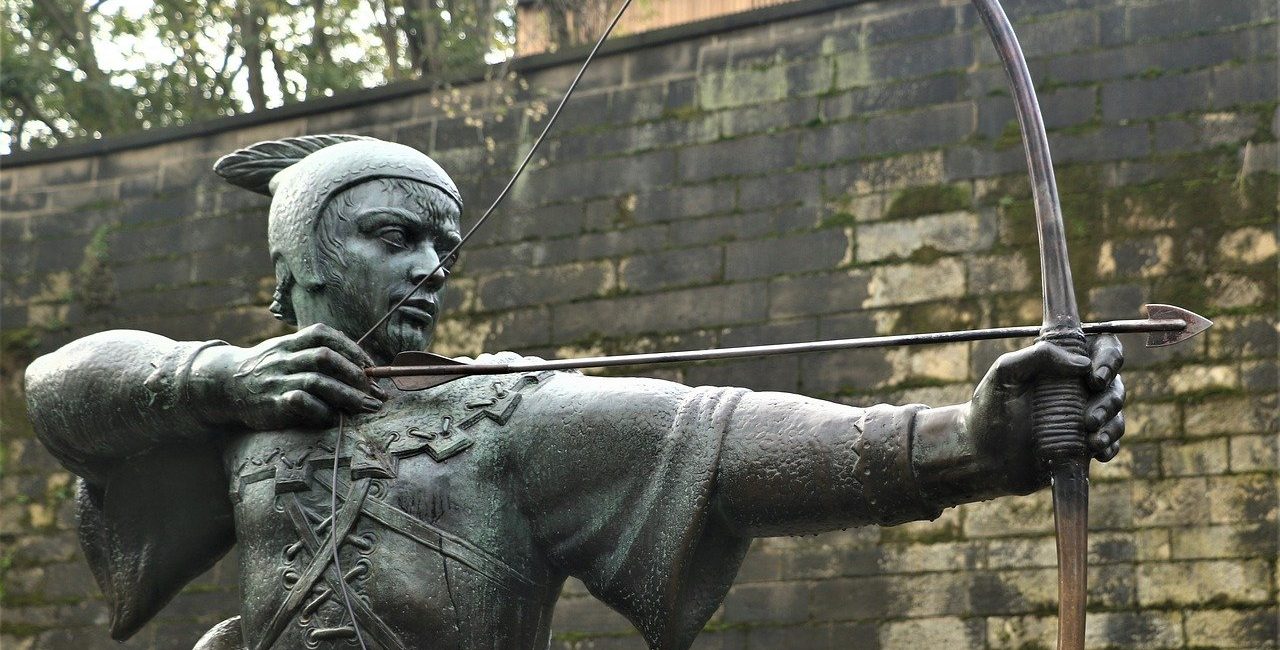 The story of Robin Hood – how it influenced the entertainment world

One of the most popular stories from the Middle Ages is that of the outlaw Robin Hood, who was identified as a symbol of protecting the poor from the tyranny of the rich.

The legend is set in 12th century England, during the reign of King Richard the Lionheart. That is when Robin Hood and his Merry Men used to rob the rich and give to the poor, around the forests of Nottingham.

The legendary heroic outlaw features in this story along with the beautiful Maid Marian, and his biggest archrival, the evil Sheriff of Nottingham. Or at least so goes the story of Robin Hood, who was highly skilled in archery and a good swordsman, and also of noble birth according to some versions.

His name became even more famous toward the end of the 19th century, when Howard Pyle wrote “The Merry Adventures of Robin Hood”, a children’s book. This contributed largely to his image as a philanthropist rather than an aristocrat or a crusades fighter.

137 years have passed since Howard Pyle’s book Robin Hood was published, in 1883, and the book influenced the 20th century Robin Hood. There have been movies created, theatre plays, even music, games, cartoons, all of which being part of the hero’s image.

More than half a century after that, “Robin Hood: Prince of Thieves” (1991) became a movie famous in its generation. Starring Kevin Costner as Robin Hood, with Morgan Freeman, Alan Rickman, Mary Elizabeth Mastrantonio, Christian Slater, and also Sean Connery, it was nominated for the Oscars, for the best music, original song. Bryan Adams contributed to the movie, with one of his greatest hits, “(Everything I Do) I Do It for You”, created precisely for the soundtrack.

The 1991 movie was followed by a spoof, “Robin Hood: Men in Tights” (1993), with Cary Elwes as the legendary hero, and also recently by two Robin Hood movies – “Robin Hood” (2010), directed by Ridley Scott, with Russell Crowe as Robin and Cate Blanchett as Marian, and “Robin Hood” (2018), with Taron Egerton as Robin.

The legend entered also in the world of casino and slots. There is a slot game in the Unibet collection, “Robin Hood’s Wild Forest”, released by Red Tiger Gaming. The game has 5 reels and 10 paylines, and an RTP of almost 96%. The top win is 300x, and it features impressive graphics and three modifiers – Maid Marian, Robin Hood, and Little John.

There were countless cartoons, like the 1973 “Robin Hood”, where all the characters are pictured as animals, with Robin Hood and Maid Marian being foxes. It received an Oscar nomination for the best music, original song.

Another popular depiction of Robin Hood was through many video games, one of them being “Robin Hood: The Legend of Sherwood”, launched in 2002. This stealth-based real-time tactics video game is developed by Spellbound Studios, and was fairly well received by critics.

Last, but not least, Robin Hood appeared in many theatre plays over the years. The first recorded one was almost 600 years ago, in 1426-27, in Exeter. In some of the most influential plays, at the end of the 16th century, Robin Hood is first depicted as a nobleman.