By: Gerelyn Terzo of Sharemoney

Turkey is throwing down the gauntlet on the cryptocurrency industry and has decided to assign money laundering and terror financing rules to the nascent market. In a presidential decree on May 1, cryptocurrency exchanges were added to a list of institutions that must operate under anti-money laundering and terrorism regulation, effective immediately, the country’s Official Gazette reported. The decree targets “crypto-asset service providers,” who are now subject to existing regulations and who will also shoulder the burden of preventing the digital assets on their platforms from being used illegally.

At the time of the presidential decree, the ink was barely dry on yet another crypto ban. On April 30, Turkey’s central bank banned the use of cryptocurrencies as a payment method, saying that it was too risky. The ban was also issued in hopes of stabilizing the country’s fiat currency, the lira. The central bank blamed the anonymous nature of cryptocurrencies, which it said could lead to losses that could not be recouped.

One business that was directly affected by the crypto payments ban is an Istanbul-based kebab restaurant. The restaurant chef, Kadir Oner, was featured by Reuters and told how he was interested in accepting cryptocurrency payments as a way to drum up business. The ban, however, means that doing so will not be possible. According to Oner, customers were already turning to cryptocurrencies to pay their bills 5-10% of the time.

Turkey’s crypto crackdown is a real blow to the country, which boasts the highest cryptocurrency transaction volume in the Middle Eastern region, according to Chainalysis data. The country’s inflation persistently hovers in the double-digit percentage range, weakening consumer buying power, and the lira continues to teeter, shedding roughly 10% of its value vs. the U.S. dollar year-to-date. In 2020, the lira saw its value decline more than 25% vs. the U.S. dollar.

The Turkish population is hunting opportunities to preserve and grow their money in light of the inflationary environment, and they have been flocking to bitcoin as the BTC price has soared 95% year-to-date through April. Rival store-of-value asset gold, meanwhile, has declined 7% in the same period.

Google Trends reveals that searches for bitcoin soared to a fresh high between April 18-24, while searches for the term “crypto” have also been trending higher. The searches are especially prevalent across Batman, Sirnak, Diyarbakır, Sirnak and Bingöl Province. 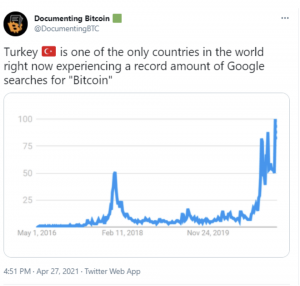 Turks are no strangers to cryptocurrencies, with some 5 million citizens having either used or owned these digital assets in 2020. In the 12-month period leading up to April 2021, there was a 600% jump in bitcoin transactions in the country.

A YouTube channel called Cryptocito interviewed random people on the streets of Istanbul about bitcoin. The results, according to interviewer @CryptoCakir, were that the locals know, trust and invest in bitcoin. In the tourist hotspots, however, “crypto is not there yet,” he said. The video also featured a Turkish spa in the tourist area of Antalya in South Turkey that accepts bitcoin as a form of payment.

Two separate Turkey-headquartered cryptocurrency exchanges were shuttered within days of each other in the wake of the central bank’s crypto payments ban. Worse, the chief executive of one of the firms fled the country with USD 2 billion in investors’ money, according to reports.

Cryptocurrency trading platform Thodex on April 19 disappeared, going offline just as founder and CEO Faruk Fatih Ozer left the country for Albania. There is now a manhunt underway for Ozer involving both the Turkish and Albanian authorities. Thodex reportedly had 400,000 customers who were lured to the exchange by advertisements using Turkish models. 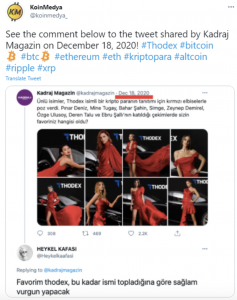 One Twitter user and Thodex customer by the name of Muhammad documented on Twitter how his withdrawal request for Dogecoin, the fourth-biggest cryptocurrency based on market cap, was stuck in pending with no response from the exchange.

Days after the Thodex debacle, Turkish cryptocurrency exchange Vebitcoin was similarly shuttered. The exchange at least had the decency to address the situation with its customers, saying in a statement that it had decided to cease operations in response to “recent developments in the crypto [payments] industry.” The Turkish authorities have since arrested Vebitcoin Founder İlker “Baron” Baş along with his wife and two employees.

Turkey’s government has a new central custodian bank in the works that is designed to remove counterparty risk in light of the recent events surrounding T and V, according to Bloomberg, citing a senior official with knowledge of the situation.

The demise of the two Turkish cryptocurrency exchanges added insult to injury for a country where the living conditions have already been under international scrutiny. Inflation in April came in at a two-year high, rising to 17.14% from 16% in March. Economists are saying that inflation in the country is actually worse than the data suggests. Inflation has been rising amid the one-two punch of a weakening lira and costly commodity imports that are paid for in the U.S. dollar. It is this sky-high inflation that has been responsible for sending some Turkish investors to crypto.

If Turkish policymakers are right, there could be some relief in sight. The central bank says that April was the worst of it and inflation will fall to just over 12% by mid-year. But the Turkish economy is far from out of the woods, with the unemployment rate alarmingly high and a lack of transparency surrounding the real data.

According to AL-Monitor, there is a discrepancy between the official labor statistics reported by the government and the reality. The state-run Turkish Statistical Institute has recently widened the breadth of its data, which is helping to bridge the gap between the two mechanisms. With the new data set, the country’s unemployment rate hovered at 13.4% in January 2021. When you cast a wider net to include people who are out of work but no longer looking for a job or those who are underemployed, the rate increases to 30.2%. According to this calculation, there are 10.7 million unemployed Turks.

In a glass-half-full outlook, Turkey’s Finance Minister Lutfi Elvan predicts that the country’s GDP will expand at a double-digit rate in the second quarter after increasing 5% in the first quarter.