Switch on the TV late in the evening and you can’t help noticing what big business gambling has become. The big names in the sports betting and casino sectors seem to have money to burn on TV ads and sponsorship deals to promote their online casinos, mobile sports betting apps and all the rest. Being so technology-led, it’s easy to fall into the trap of thinking that this sort of gambling is some recent innovation. However, that couldn’t be further from the truth, as Roll the Bones; the History of Gambling by David Schwartz eloquently demonstrates. 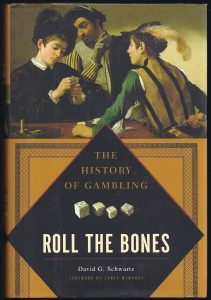 Contents hide
1 A tale of epic proportions
2 Gambling’s greatest characters
3 Encyclopaedic knowledge
4 Why do people love to gamble?
5 The human condition
6 About the author

A tale of epic proportions

What quickly becomes apparent from this 592-page tome is that gambling is an inherent component of the human condition. Schwartz has worked in a variety of roles in the gambling industry, but he is, first and foremost, a historian by trade. He wastes no time in taking us back – way back – to the earliest days of pre-civilization.

The title itself refers to prehistoric man rolling knucklebones to get a random result – a rudimentary form of dice. He then leads us on a whirlwind trip through the ages, touching on biblical times, the first playing cards in the middle ages, the rise of gambling hubs like Las Vegas and even a history of online gambling and how it has evolved over the past decade.

Schwartz doesn’t just capture the “what” of gambling, but also the “who.” Anyone who has spent time at the casino or the racetrack will know that this is a pastime that can attract some colourful characters.

But gambling’s evolution has also been shaped by some of the most influential people in history. Along the journey, Schwartz introduces the reader to Julius Caesar, George Washington, Casanova and, of course, modern gambling pioneers like Steve Wynn.

There have been other books written before and since about gambling. But surely, none of them have attempted to cover so much detail on so many events. Schwartz has succeeded in creating what must be the most comprehensive resource on the topic of gambling in existence. Roll the Bones is almost encyclopaedic in nature, and while this is its greatest strength, it is also its primary weakness. Don’t go into this book expecting some light reading. The book has been meticulously researched and curated to the point of obsession, and it really is full history, in every sense of the word.

From HG Wells’ Outline of History to Will and Ariel Durant’s epic 11-part series Story of Civilization, we have seen time and again that writing an in-depth history of anything that covers millennia is necessarily going to be either cursory or heavy-going. Roll the Bones falls decidedly into the latter category, and as the story progresses through the Renaissance period, the story of yet another poor soul who tried and failed to come up with the perfect formula for winning at what is effectively modern-day Keno becomes a little wearing – if only because we know from the outset that he is doomed to fail. This is, however, a minor quibble, and even if you are not a habitual casino-goer or sports betting enthusiast, this book has a lot to offer any student of human nature.

Why do people love to gamble?

A sure indication that a book like this has been well-researched and presented is that it makes us ask questions of our own volition without directly posing them – and then starts to present some answers. Sure, Roll the Bones is mostly concerned with historical facts, but the detailed contexts allow us an insight into the motivation behind gambling.

If you were to ask some modern-day gambling helpline resource why people gamble, you will be presented with all sorts of convincing reasons. These might include financial desperation, anxiety, social pressure and compulsive or addictive disorders. They are all correct as far as they go, but the stories that Schwartz presents us again and again throughout history run far deeper and show that there is something almost instinctive in our appetite for a wager – and it all comes down to the concept of risk and return.

In the context of gambling in a casino, experts discuss risk and return all the time. In this data-rich age, you can find information on the house edge, average variance, payback percentage and lots more relating to every table game or slot machine. Serious gamblers will study these mathematical principles in detail in order to decide where to place their bets.

Gambling on the turn of a card or the spin of the slot reels is perhaps the most basic, stripped-down manifestation of our instinctive drive to take calculated risks with the reasonable expectation of some positive outcome that will lead to our advancement. Roll the Bones tells some fascinating stories and makes compelling reading. But in the end, it demonstrates that the millions of people placing bets via their smartphones in 2021 are driven by exactly the same core motivations as their ancestors with the knucklebones all those years ago.

David Schwartz was born in the gambling Mecca of Atlantic City, New Jersey, in 1973 and is one of the world’s foremost authorities on gambling and casino games. In addition to Roll the Bones, he has also authored several other books on the topic, including Grandissimo: The First Emperor of Las Vegas (2013, Boardwalk Playground: The Making, Unmaking, & Remaking of Atlantic City (2015) and Tales from the Slot Floor (2018).

Schwartz is regularly quoted and interviewed for TV and media as an authority on the casino industry. He is currently serving as the Director of the Center for Gaming Research at the University of Nevada.

Roll the Bones; the History of Gambling is available in hardback, paperback and Kindle editions from all the usual sources. It has also been adapted as an audiobook, read in unabridged form by Eric Martin.