Is This the Future of the Guitar?

When you think of musical instruments – assuming that you ever do! – you kind of imagine that they were created, then forever remained the same. But evolution takes place everywhere. Even in musical instruments. And perhaps nowhere more so than the guitar. The earliest models were sort of bastardised lutes and tanburs. In the 15th century the guitar became its own thing, but it would take until the mid-18th century to gain a form that we would recognise today. Even then, it continued to evolve until it found its cool in the 1950s and ‘60s. Since then, guitars have remained relatively steady. But now, things could be changing once more for the guitar. And its future may well look a little like this. More and more guitarists are flocking to convenience above everything else. Even manufacturers like are launching their own online guitar lessons to make it as easy as possible for beginners to learn on the go, such as the many mixed reviews of the Fender Play platform, along with countless other online methods. And this kind of convenience has extended out to guitars for being on the road now too.

Contents hide
1 The Travel Guitar Concept
2 What is a Travel Guitar?
3 Why is the Folding Guitar Idea Growing? 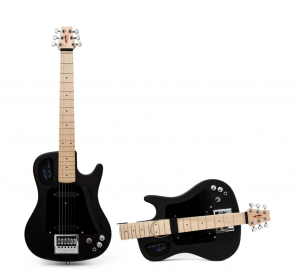 Travel guitars have been a concept for decades, the demand behind the idea originally being convenience. While smaller than some instruments – say, the tuba, double bass and hyrdaulophone – guitars still carry a reasonable footprint, which isn’t conducive to easy travel. They are also easily spoiled. As air travel became commonplace, and airlines became less amenable, musicians were finding their beloved instruments relegated to hold storage, and subject to damage – either through pressure or poor-handling. This intensified demand.

The focus was, for many years, on simply reducing the size of guitars for travel. The problem there, was that the ease of play, which is part of the guitar’s draw, was lost. A smaller body meant that the instruments felt less comfortable. Closer, shorter necks and strings made the instruments more difficult to play. Folding guitars were mooted – and created – but only as novelties. And poorly made. It’s only in the last decade that artisan instruments have become a viable proposition.

What is a Travel Guitar? 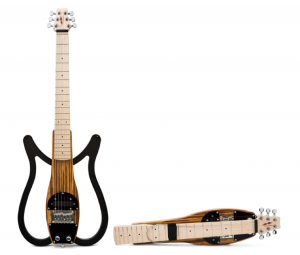 The new generation of travel guitars take the traditional instrument’s size, shape and feel, but incorporate a removable screw feature, which allows the neck to be bent forward across the body. This immediately halves the length of the guitar, making it easier to transport, while having the added bonus of protecting the strings from damage in transit. It bears no impact upon the instrument’s tone, solidity or playability. To play, you simply straighten the neck and restore the screw. And the idea has grown from there, generating instruments like the Snap Dragon SnapaXe E, which has a stored size of just 54 x 8 x 10 cm. And it’s this that has caught the imagination.

Why is the Folding Guitar Idea Growing? 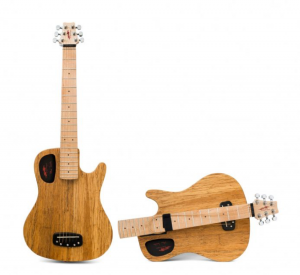 Guitars remain hugely popular instruments. When kids listen to music, it’s the air guitar they’re most likely to play. The internet is peppered with free guitar tutorials. The bass player is possibly the coolest person currently in rock. The instrument as a whole has become synonymous with cool. But the issue that remains is associated with size.

Although not massive, traditional guitars take up space. When they’re not being played, they often just sit there; their cases awkwardly gathering dust. And that’s not a problem if you love to play, but UK houses are getting smaller. In fact, new-builds are 32% smaller than their 1970s counterparts. Look inside, and you’ll see that storage space is non-existent. A guitar that folds away suddenly becomes a very interesting proposition.

Then we go back to the original idea of travel. Sitting on the bus with a cased acoustic guitar on your lap has never been a comfortable experience. A folding acoustic guitar will just slip into a backpack. Plane travel becomes worry-free once more, with doubts about hold storage completely removed as instruments fold away into carry-on bag size. Even car travel becomes easier, the smaller footprint reducing both storage size and the potential for damage.

Travel guitars have often been smiled at – largely due to their slightly chequered history. But instruments evolve according to their use and the needs of their players. And at the moment, the movement seems once more to be towards those age-old favourites; quality and convenience. The folding travel guitar provides just that.